Proof of His Love: Jesus Dies With Man

Large congregations join to attend the Good Friday service, April 10, 2020 with District Apostle Edy Isnugroho. More than 4,500 points of reception throughout Southeast Asia and even overseas took part in this service through YouTube and Facebook live.

The District Apostle used the passage from John 10: 17,18 as the basis for the service.

The District Apostle at the beginning of his sermon explained that it is startling to read the accounts of Jesus’ suffering and crucifixion. “It is natural to think of it as a terrible thing,” said the District Apostle. For His opponents, the day of the crucifixion was a day of triumph. They had succeeded in influencing the people to take their side. Even His disciples had abandoned Him. He stood alone there; they crucified him, he died – Jesus’ enemies seemed to have reached their goal. “Jesus seems so weak, He is finished.”

To the disciples it seemed as though the evil one had triumphed in the crucifixion. They did not understand anything of these events: How could He, with all His power, have allowed Himself to be arrested? How could He sim- ply surrender and let His enemies have their way with Him? Even God in Heaven does had not intervene. “In the eyes of the disciples, Jesus was totally defeated.” District Apostle underlined.

However, Jesus said clearly on the cross: “It is finished” (John 19:30). With these words, He was expressing: “No, I am not merely a victim of the human violence that has brought about all of these events. It is not the evil one who has succeeded in executing his plan. It is I who have fulfilled My mission! My mission was to do the will of the Father.”

Now from God’s perspective we can see: the will of God was for the Son to come to the earth in order to show all mankind the love of God. He thus brought to expression: “I am on your side. I am showing solidarity with you. I will feel hunger. I will feel thirst. I will feel pain. I will have to confront the same things that all human beings must encounter in their lives: the weakness of others, deception, falsehood, cowardliness, and everything else imaginable and I am still human to say to you: I am with you to the end. I will even go to My death! I will show solidarity with you: since every human being must die, I will die too.” It is the will of God to show human beings that He loves them. God is with humanity. He is on their side to the very end, to the very point of death!

“But Jesus Christ was not a slave forced to do the will of His Father, absolutely not!” confirmed by the District Apostle. “For Him it is important to show: ‘My Father loves Me because I am one with Him. His will is also My will. The love of the Father is also My love. I want to redeem humanity. That is why I do battle against evil.’ This was His own decision.”

We want to actively work

Let us look into our lives today. Right now it is seems the evil is in power and weakening the faith of God’s children, some have turned away from God. Let us always be watchful! In all situations let us ask God what He wants to want. “God wants us to be an overcomer, to be as faithful as Jesus to the end.” said the District Apostle. 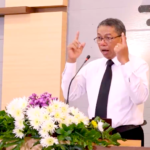 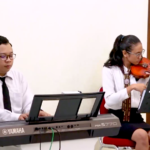 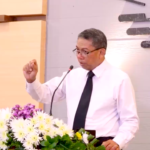 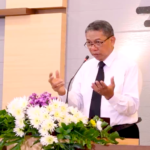 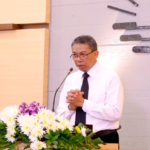