Published July 4, 2021 | By nacsingapore
“It is the same everywhere, only different,” Chief Apostle Hans Urwyler once said many years ago. Life and faith differ greatly in the congregations around the world, yet there is so much we have in common. community presents some of these commonalities in its latest issue, 03/2021.
The same faith: focus on Jesus Christ

“As Christians we have many reasons to offer and sacrifice to God,” Chief Apostle Jean-Luc Schneider said recently. The possibilities vary, but “what counts is the heart” the Chief Apostle says. This issue of community publishes the Chief Apostle’s full sermon on giving to God and features additional services conducted by him.

Two thousand years ago, Jesus taught the people about the will of God and healed them. This is the subject of the Bible story for the children. The focus is on Jesus Christ, but not only in “The healing of a blind man in Jericho”. There is also a portrait of eight-year-old Sarangoo from Mongolia, who tells us about herself and her family and her congregation and says: “We all believe in Jesus and love Him.”

Of the same nature: focusing on what we have in common

Women and men differ in many ways. But in one thing they are the same: how God sees them. This is what the Bible says and this is the conclusion that the District Apostle Meeting reached, who studied man and woman in the image of God and published their findings in an essay. “God never intended one sex to be subordinate to the other because He created both man and woman equally in His image.” The essay was published on nak.org and can now also be read in community by those who do not have access to the internet. A summary of this topic will be published on nac.today in the coming week. 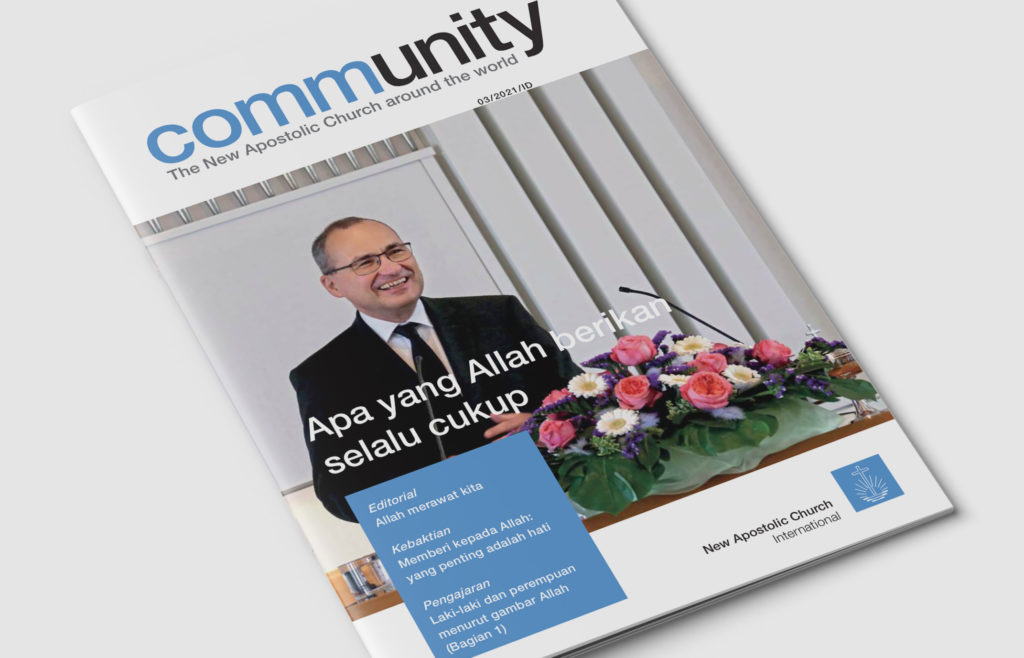 The same perspective: focusing on our neighbour

For Christians the church building is a place of worship, teaching, and fellowship. The sacred place provides a space for prayers, sermons, sacramental acts, and music. But this space also has to be created and maintained. With approximately 58,500 New Apostolic congregations around the world, this represents a huge undertaking. community describes various situations and puts the focus on the commitment and initiative in the congregations. The aim of all activities is to create space where people can live their faith.

For many people it is a matter close to the heart to help their neighbour during a crisis. Whether it is because of hunger or some other disaster, whether relief is offered by aid organisations or by people directly, there are people who have other people in mind and do not abandon them to their fate. Examples of relief efforts by aid organisations and private initiatives make charity visible.

community is the member magazine of the New Apostolic Church International. It is published four times a year, is free of charge, and available in many languages. It can be read and downloaded as a digital copy here on nac.today. The community magazine is printed in regions where the Church members have no or only limited access to online media.